settings
June 4, 2019
settings
What are Light Libraries?
The sun is starting to set after a long day for the children of Makhasa School in South Africa. With Matric Exams coming up, it is a very busy time of year for students seeking to graduate from high school. Students study as much as they possibly can, but as the day fades away and night falls, they find themselves reading in the dark. To continue studying, some students resort to candles or kerosene lamps. These lamps make it difficult to breathe and can cause severe burns when mishandled. Sadly, in communities without reliable sources of light, students have limited options for studying after dark. For these students, success has very strict bounds. In the hopes of uplifting these children, and eliminating the boundaries to success, Unite to Light has partnered with multiple South African schools to provide Light Libraries. 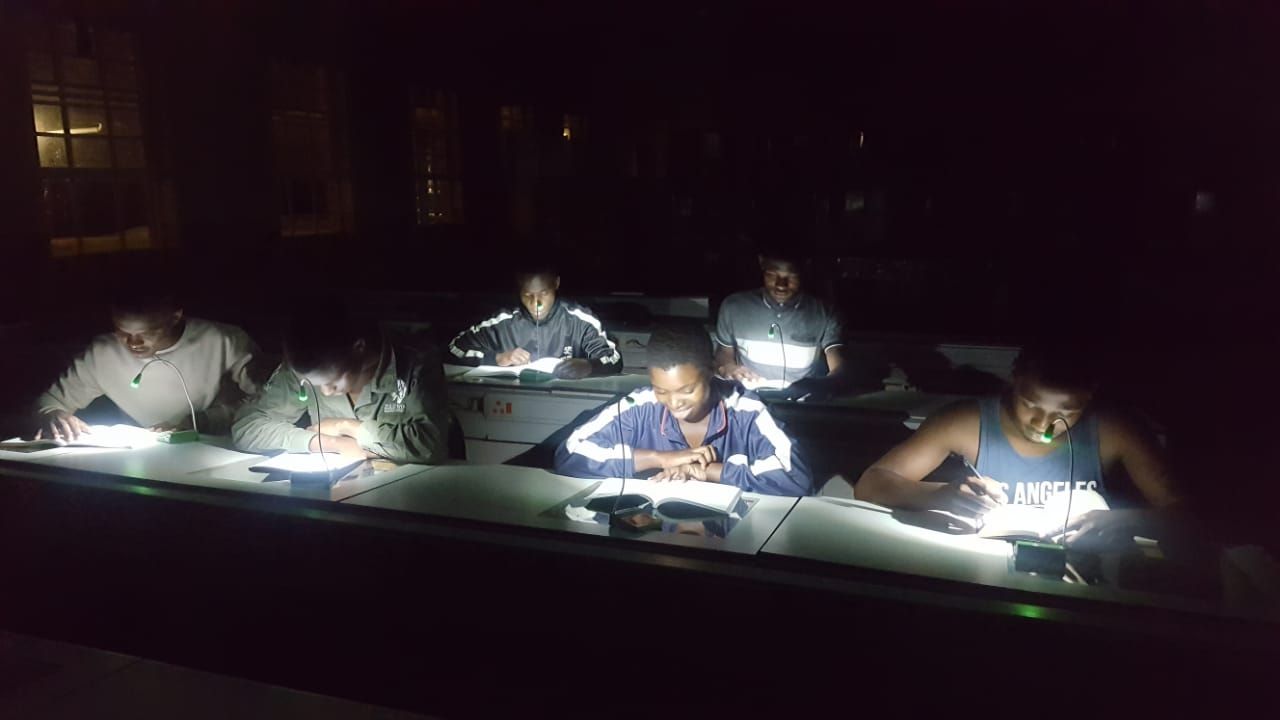 settings
Students from Mahkasa High School in KwaZulu Natal region of South Africa studying for their Matric Exam with our solar Luke Lights.
settings
Light Libraries consist of school “owned,” solar powered lamps that are loaned out to students when they need them. Similar to checking out a book from a local library, lights are brought home to be used by students and returned to the school by an agreed time. Unite to Light worked with Makhasa School in South Africa to create the first Light Library in 2015. Seeing significant improvements to student test scores, Unite to Light donated 1,000 Luke Lights in 2017 to create a series of Light Libraries across 14 South African secondary schools.

These lamps are an especially valuable resource around the time of Matric Exams (equivalent to high school exit exam), where students may find themselves devoting much time after school to their studies in order to pass their exams and graduate from secondary school. Without solar lights, a student’s ability to study depends on their ability to make use of the limited natural daylight, or expensive, dangerous and polluting kerosene or candles. For most, this means that as soon as night falls, schoolwork must come to a halt.

To gauge the impact that Light Libraries have on a student’s success in school, the Principals of each school that received lights provided three years of historical test data (before solar lights) and agreed to provide three years’ worth of future test data. Understanding changes in pass rates over time would indicate the utility of Light Libraries as a resource for productivity throughout a student’s day.

settings
Results
In comparing the Matric Exam pass rates from 2017 to the year before the schools received lights, there was an average increase in pass rates of 21%. This means that in a class of 100 students where only 76 had graduated in 2015, in 2017 there were 97 graduates. This is significant academic progress and is especially important for an area where unemployment is 50% and even greater for those without a high school diploma.

settings
Average increase of 21% in Matric pass rates among the 14 South African schools from the year before they had lights to their 2017 matric pass rates.
settings
While buoyed by the first year results, the goal of the Light Libraries is to create long-lasting benefits in a school. This is why Unite to Light has required three years of test data at each school that received lights. Looking at the Matric Exam pass rates for those same 14 schools with Light Libraries in 2018, compared to 2017 pass rates, we found an additional average increase of 5%. On average the scores were 26% higher than before the schools received solar lights. Scores generally increased slightly or stayed consistent; which is impressive considering how high Matric Exam pass rates were in 2017. Multiple schools maintained 100% pass rates for both 2017 and 2018.

settings
Additional average increase of 5% in matric pass rates among 14 South African schools that created Light Libraries in 2017 and continued to use them in 2018.
settings
In addition to looking at the change in pass rates, we wanted to see if the number of lights a school received impacted test scores. We found that schools with a higher light to student ratio had, on average, higher pass rates for the Matric Exam (a positive correlation between light to student ratios and the pass rate for the Matric Exam). Although these results attest to the positive impact of solar Luke Lights on student performance, developments still need to be made about this relationship.

Another 1,500 solar Luke Lights were deployed in a similar model in 2018. We will continue to use the data regarding Matric Exam pass rates to understand the effects of our solar Luke Lights on communities with limited access to a reliable source of electricity. In doing so we hope to see Matric Exam pass rates maintain themselves or increase over time as a reflection of academic growth through the use of our lights. Upholding these trends will guarantee a bright future for students and for the development of the community.

The progress students have shown since Light Libraries have been introduced to their schools is remarkable. Matric Pass Rates have improved in virtually every school and current trends indicate that more positive growth is to come in the coming years. These students have a real desire to learn, and they work tirelessly towards their goals and having access to something as simple as a portable light has allowed them to take full control of their own academic endeavors. These results have reflected the ambition that lives in every student and attests to the fact that a bit of help often lays the foundation for an environment with no bounds. We are incredibly impressed by what the students have been able to make from the help we have provided. To be so willing to learn in the face of obstacles everywhere speaks volumes. To continue these amazing trends, and to continue providing a platform for growth among other communities, we at Unite to Light shall continue to support these communities and communities alike.